"Architecture is a kind of artistic behavior, an emotional phenomenon, beyond the problem of construction." 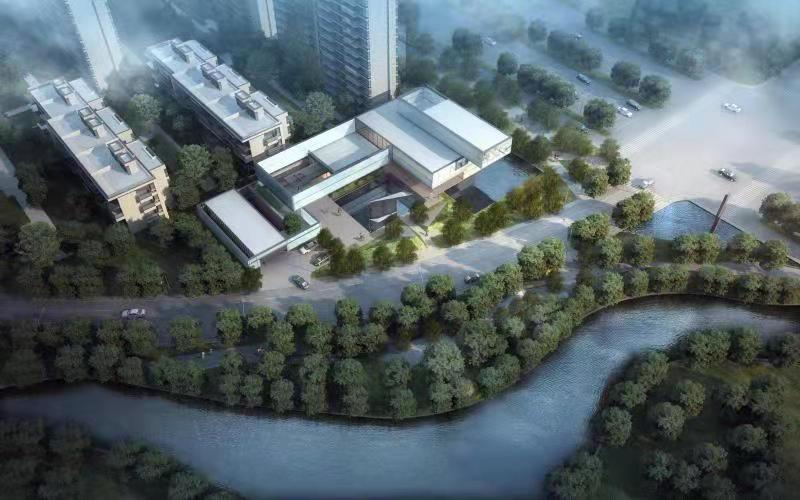 Renheng land century marketing center is located in the central Innovation Zone of Nantong City, the ancient capital of Jiangsu Province. HWCD takes architecture as a bridge to carry the history and future of the city.

Designers use minimalist structuralism to explore the integration of city and art. The so-called art meets confidant is to convey modern life style through the beauty of space. As the initial impression of the marketing center, the reception area of the front desk outlines the sharp three-dimensional line sense with the shape of arc and straight line. Combining the metal mirror ceiling with polished marble, this paper makes an interesting space discussion. Break the traditional architectural design of the closed space, large-scale use of glass and metal and other transparent and reflective materials to resolve the boundaries inside and outside the building. The outdoor space uses ingenious geometric segmentation and light and shadow changes to ensure the overall openness and build a harmonious relationship between the inside and outside of the building. The layout of waterscape creates a mirror effect visually, emphasizing the overall art form. High contrast black and white create a spiral art staircase, and place the giant chandelier in it, just like a dazzling star river pouring into the mysterious black night, causing infinite reverie. Removing unnecessary elements, the display wall and service desk have no unnecessary decoration, no complicated decoration, and only large area of blank space and the most concise and powerful lines express the core of structuralism. B1 negotiation area is designed to create a comfortable negotiation space with neutral color. Marble and leather, wood and cloth art, different materials combine with unique modern life style and taste in the collision.

In the same space, although there is no obvious partition, the designer naturally divides the space function through the ingenious combination of geometric modules and lines. The separation effect of part and whole is not only independent, but also a whole. Soft arc and irregular ellipse create children's activity area. The designer adds bright warm yellow to increase the interest of the space. It is only one wall away from the negotiation area, and it is designed as a translucent partition, so that parents can see the scope of their children's activities at a glance while communicating. The smooth and simple stair space with a sense of line structure is harmonious with light and shadow with high-purity white space. Through the linear features and visual perspective, a huge half open and half closed modern space is created.

Art sculpture, which is made up of irregular geometry, is like the essence of structuralism. The seemingly separated parts are often not disordered and disordered. In the design of the negotiation area, the structuralism and functionalism of modern architectural aesthetics are combined. The dark antique frame is used as the partition and the beige white sofa group is used to strengthen the sense of visual hierarchy. The dome lamp and the placement of sculptures make two different geometric forms of "square" and "circle" talk in space. △ discussion area and water bar on the second floor

Stepping into the discussion area, the space rhythm is simple and clear, and the fabric and stone materials are properly combined, which seems to be a random mix and match, in fact, enriches the space level and highlights the overall functional diversity.

The art form of structuralism creates a unique modern architectural aesthetics, and HWCD uses the integration of points, lines and surfaces to form the starting point and transition of space.